A while ago I gave a talk on the BPF verifier at our internal system security seminar. As an introduction, I showed a simple, annotated plot of the evolution of its number of lines of code over time. The verifier ensures BPF programs are safe for the Linux kernel to execute. It is therefore critical to Linux’s robustness and security1. In this post, I’ll explore the verifier’s size and complexity over time through a few additional plots.

Update for the 5.5 Release

Linux v5.5 comes with type checking for BPF tracing programs, made possible by BTF. Thus, BTF, and its main source file at kernel/bpf/btf.c, now play a role in the verification of BPF programs. I’ve updated the statistics retroactively, from Linux 4.18, when BTF was introduced, to take this into account.

Let’s start with the simplest metric of complexity and plot the evolution of the number of lines of code (LoC). The verifier lives at kernel/bpf/verifier.c2, but since Linux v5.5, it relies on BTF at kernel/bpf/btf.c for type checking. For the first plot, we can compute the number of LoCs with:

To compute the same without comment lines, I used Lizard.

The plot starts at v3.18, when the current ahead-of-time verifier for eBPF was added. Before that, verification was done at runtime.

The annotations on the plot show the new features that contributed the most to each LoC increase: direct packet accesses, function calls (bpf-2-bpf), reference tracking… The logs can be easily explored with the following command:

Now, there’s clearly a sharp increase of the number of lines over the last few releases. But that’s only fair given that several new features have been merged in the BPF subsystem recently (e.g., bpf_spin_lock, bounded loops, and type checking). Using the following command, let’s instead compare the size of the verifier with that of the whole BPF subsystem:

The verifier initially made up 40% of the BPF subsystem, but that number kept decreasing toward 20%… until the addition of BTF in v4.18. Since then the size of the verifier+BTF has been growing faster than the rest of the BPF subsystem. It takes a lot of code to resolve and check BPF types loaded with the BPF programs and the verifier increasingly relies on BTF to enable new features (e.g., bpf_spin_lock and type checking).

The number of lines of code is often a poor metric of a code’s complexity though. After all, a lot of the verifier’s line of codes are simple switch statements over helpers and program, map, and register types. Let’s complete our analysis with another metric, McCabe’s cyclomatic complexity. 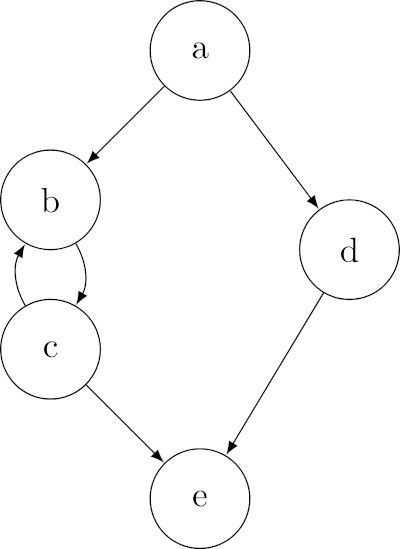 Given a function, McCabe shows that the cyclomatic complexity can be computed as either one of3:

Which gives us a cyclomatic complexity of 3 for the above function. See the paper for other examples.

To compute the cyclomatic complexities of the BPF verifier, I used Lizard again. Lizard gives us the cylomatic complexity for each function in verifier.c and on average, over all functions. I used the -m option to count entire switch statements as a single if, instead of counting each case5:

As we can see with the blue marks, the cyclomatic complexity is quite stable, with even a slight decrease over the last few releases. This decrease is actually caused by an increase of the number of small, uncomplex functions. This small functions are numerous in the BTF code in particular, as can be seen by the drop for Linux v4.18. The verifier grew from 32 to 414 functions, most of which are very simple.

The 10 most complex functions, on the other hand, are getting more complex. In the v5.6 release, these functions are:

Any Other Complexity Metrics?

Given the two metrics I considered, it seems clear that the BPF verifier is getting more complex. Whether this is an issue is a matter of opinion though. But at least now we have metrics on which to base that opinion. By the way, any ideas of other metrics I should include?

In addition, the two above metrics have their own limit: all lines of code (resp. independent paths) don’t have the same complexity. Besides, the verifier.c file does not only contain code for the verification of BPF programs. It also performs some amount of rewriting for BPF calls, the map references, and BTF. It looks debatable to me that these should be included in any complexity measure6.

In the end, even with a perfect measure of complexity, it wouldn’t tell us if this is a problem. One thing is clear: we need to keep reviewing and testing the verifier to avoid bad surprises.

Thanks to Céline, Quentin, and Aurélien for their reviews of this first post!